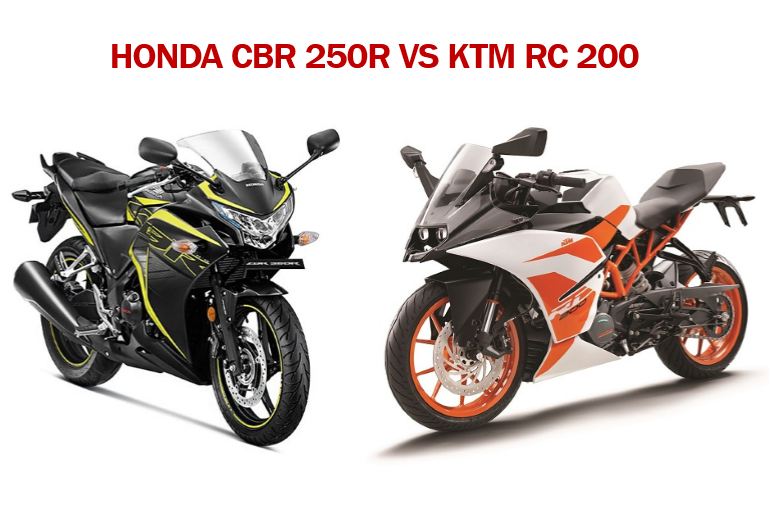 Maddening KTM RC 200 vs Honda CBR 250R, check out which one settle your nerves

We bring you a much-talked comparison, KTM RC 200 vs CBR250R from Honda. The Indian arm of Honda launched the CBR250R in the year 2011. And since then the sports tourer is getting only color schemes every year. RC 200, on the other hand, was launched in 2014. CBR 250R upped the game in the quarter-liter segment but later the bike lost its charm due to VFR styling, low power and high weight. However, the RC 200 offers brutal performance for its size.

Speaking about the performance of the bikes, The CBR has a decent performance whereas RC 200 is impressive in terms of performance. Honda does a 0 to 100 kmph in under 9 seconds and, on the other hand, KTM does it in 9.4 seconds even though the bike has lesser torque than the CBR. The CBR, due to taller gearing, has a higher top speed than the short geared RC 200. The KTM tops out at 140 kmph whereas CBR250R can touch 160 kmph on the speedo. Performance wise both bikes are way different, one offers hair raising, terror striking performance and other is lazy but strong.

When talking about the ergonomics, the Honda trumps here by offering versatile comfort here. The seat height on the Japanese bike is also lower at 780 mm. Rider triangle is made for long distance touring whereas, in RC 200, the sitting position is highly committed which is best suited for track riding. Touring on RC will cause strain in wrists and back and ultimately the owner will refrain from doing long distances on this bike.

The suspension duties on CBR250R is performed by regular Telescopic forks at the front and linked type monoshock at the rear. The suspension is tuned towards the softer side which is a boon on the bad and broken roads, which are plenty in India. KTM, on the other hand, offer stiffer suspension setup which is perfect for corners and will send shocks when riding on bad roads.

Also Read: This is all we know about KTM 390 Adventure

Just look at them and tell me which one looks striking? Obviously RC200. The KTM trumps in the styling department because of the sharp edges everywhere, be it side fairing, sculpted fuel tank, razor-sharp front end with dual projector headlamps. The exposed orange color Trellis Frame, as well as orange Allow wheels, makes the bike stand out of the crowd. Not to forget those edgy rear view mirrors. Japanese bike is seriously old now, the bulky front end doesn’t make people drool over it. The Y-shaped VFR inspired headlamp is the real problem maker here. Honda must launch the dual headlamp CBR300R in the Indian market and they might see an increase in sales.

Both the sports bike here has digital readouts for the instrument cluster. In terms of looks, Honda’s cluster looks better with a greyish finish around analog tachometer and below which sits a digital display with all the necessary information. Honda has only one trip meter and that’s a blunder. RC 200’s has a full digital display which offers a plethora of information to the rider. The information is too much to digest for anyone.

CBR250R has an option of dual-channel ABS whereas the RC 200 has a single-channel ABS. In terms of safety, Honda has an upper hand. However, when we speak about the tyres, KTM offers better grip with MRF tyres whereas Honda lacks behind with harder compound Continental tyres. Dual projector headlamps of RC provides better illumination in the night but CBR has LED headlights which KTM lacks.

Now, which one are you going to buy? This only depends on what your requirements are. If you want an age-old motorcycle for comfortable city commuting as well as highway touring, then CBR250R is for you. Have a strong back and want to experience how a proper track bike feels like, go for RC 200.