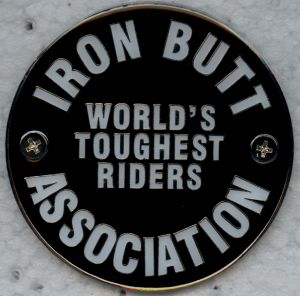 Well when you start relaxing after a great ride and pat your back for few hundred kilometres, the Iron Butt Association will come as a bad news for you. This group is known for its bad ass and butt shattering challenges across the world. It’s not only long distance riding but long rides with very limited time windows. Riders across the world take up challenges introduced by the IBA and on successful completion they are felicitated and recognised by the same.

The 60,000+ members of the Iron Butt Association are dedicated to safe, long-distance motorcycle riding.Although it is based in the United States, IBA has thousands of enthusiastic members throughout the globe! One of their popular slogans is, “The World Is Our Playground.”

The Iron Butt Association (IBA) does not have membership in the traditional sense. They do not have yearly dues, formal meetings or a monthly newsletter. The IBA is a little more loose knit organization than most clubs. Generally speaking there are several ways to earn membership. The most notable is to be a finisher of the Iron Butt Rally or a successful finisher of one of the other rides they sponsor, such as the Saddle Sore 1000. Rally workers and supporters are also granted membership status.

The Iron Butt Association releases several documents about the Iron Butt Rally and Long-Distance Endurance Riding, including their hottest title, the “Archive of Wisdom”, which contains a list of Long Distance Riding tips from the most seasoned, veteran riders.

Besides the North America specific rides (USA and Canada), Great Lakes of North America rides and Iron Butt Association Recognition Award, there is a list of Rides that can be done the world over:

The SaddleSore 1000 and Bunburner are very popular in India.

Rides that can be done anytime of the year.

Of-late few Indian riders have been successful in completing the saddle sore and Bun-burner rides. Devjeet Saha set a record by completing this challenge on a Hero MotoCorp Splendor Pro, a 97cc motorcycle. Saha has attempted the Saddle Sore challenge earlier too, but it was always on bikes over 150cc. Chithra Priya became the first Indian female bike rider to have completed the Saddle Sore endurance ride. Bikerni Seema Sharma Dora of Delhi became the first Indian woman in history to have achieved the Bun Burner record (2500kms in 36hrs).