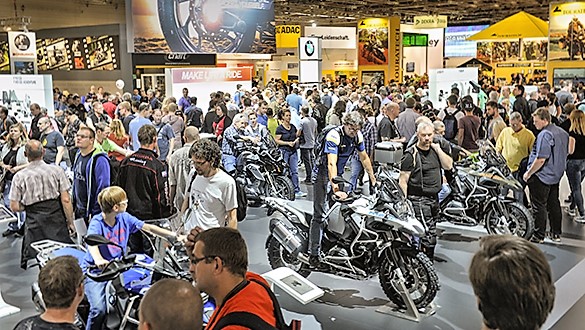 Retro Motorcycles at the 2016 Intermot.

This was the motorcycle event not to be missed! A total of 1,133 providers from 40 countries with innovations on 200,000 m² exhibition space and a host of creative industry and sporting special events. Only held every other year, Intermot is a very special show where manufacturers look to compete against one another and can show off the latest and greatest two-wheeled creations.

This year too Intermot came with a burst of new sportsbikes from the Honda Fireblade to the Ducati SuperSports but there was a serious focus on retro style which came with a combination of cool classic biking looks with cutting-edge technology and modern handling. We bring to you the 5 most interesting retro motorcycles seen at the 2016 Intermot.

BMW R nine T Racer
The BMW R nine T Racer channels the spirit of the 1970s racing bikes and shows what a huge difference a couple of pieces of injection moulded fairing, a new seat and fuel tank can make to a model, The 1170cc boxer engine putting out 110bhp plus ABS as standard will add to the advantage. Triumph Street Cup
We all know Triumph is the king of the retro bike. Every time it creates magic out of new angles for its classic range or classic angles for its modern rangeTriumph .The Triumph Street Cup is a Street Twin underneath but the attraction is a host of custom touches like drop handlebars, the single seat with cowl, tiny fly screen visor and mirrors coming out of the handlebars, turning it into a beautiful Café Racer. Honda CB1100RS
Ever imagined Honda’s new Fireblade in a retro look? This bike was one of the standout stars of this year’s show, the new style is premium on style with its seriously overhauled CB1100RS. It’s aiming to get the retro look and feel right this time with new forks, aluminium side panels and an improved café racer style riding position. Now this seems like a serious design thought. Moto Guzzi Audace Carbon
This big boy Moto Guzzi turned the retro approach on its head by taking its already retro-looking Audace and bedecking it in carbon fibre. The brake callipers and cylinder heads, which are neither carbon fibre finished nor matte black painted. They are read instead. This stealth cruiser sports a heavy metal and retro look.