Royal Enfield Rider Mania is the melting pot for the Royal Enfield owners and enthusiasts. The RE enthusiasts from all corners of the world gather during the Rider Mania and every year, number of participants is growing significantly. Also, this is the most popular annual event organized by the motorcycle manufacturer. This time, the brand is hoping to see a significantly large number of footfall at the annual event.

At the Royal Enfield Rider Mania 2017, the motorcycle maker showcased its twin 650cc models Continental GT 650 and Interceptor INT 650. Both the models are gearing up for launch in India soon. This time too, we might expect something interesting in the event. As Royal Enfield has just created land speed record at the Bonneville Speed Week with its one-off custom-built Continental GT 650, it won’t be too much to expect the particular model to make a special appearance at the upcoming event in Goa. 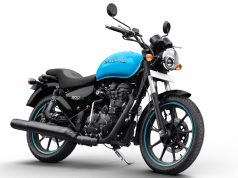 Royal Enfield 500 production stopped! Get one before stock dries out