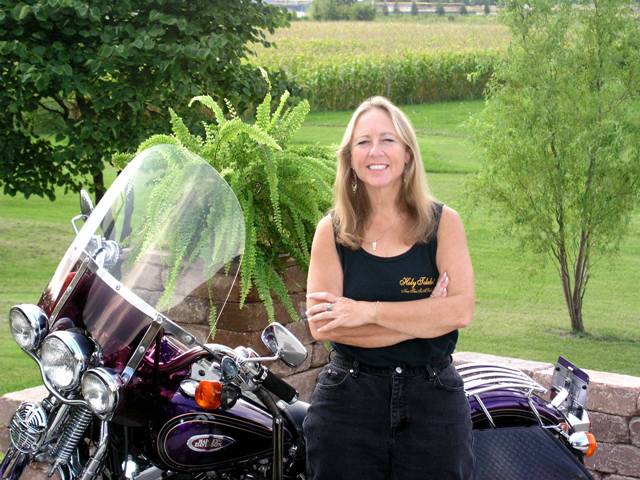 Becky Brown is the founder of the motorcycle riding organization Women in the Wind (WITW). From a small ad in a Toledo newspaper in 1979 that drew 10 responses, Women in the Wind grew to 70 chapters and over 1,400 members in the United States and as far away as England and Australia by the early 2000s.

Brown had ridden as a passenger on the back of a motorcycle, but she was curious what it would be like to be at the controls. In the mid-1970s, a co-worker rode to work on a small 125cc motorcycle and Becky asked him to teach her to ride. Her confidence in riding grew quickly after those first few laps around a parking lot. She borrowed friends’ motorcycles occasionally and not too long afterwards she bought her first bike, a four-cylinder 350cc Honda.

The Honda proved to be a great starter bike. Brown honed her riding skills on the trusty little machine. A short time later, she had her first solo ride on a Harley-Davidson and she instantly fell in love with the big American V-twin. Brown realized a dream when she bought a 1973 Harley-Davidson 1,000cc XLCH kick-start Sportster.

“I’m not sure why riding a motorcycle was an idea I had to act on, except that I was always a tomboy and felt the boys were having more fun compared to the girls,” Becky says. “I rode show horses all through my childhood. Riding horses gave me a feeling of freedom. Riding a motorcycle kind of felt like an extension of that feeling.”

Brown gradually modified her Sportster into a chopper. She later rode a Harley-Davidson Superglide and a Heritage Softail in the late 1980s.

In the mid-1970s, Becky didn’t know of any other women riders in her area. She envied the brotherhood she saw in the male-dominated motorcycle clubs so she decided to try to find fellow women riders who shared her love of riding. She placed an ad in her local newspaper in the spring of 1979 and was surprised at the enthusiastic response she received. Ten women responded to the ad. The group’s first ride was on the scenic roads along the Maumee River.

“At the time of this first run, I had no idea it would eventually amount to an international organization with hundreds of members,” Brown said.

The name Women in the Wind came up in a spur-of-the-moment brainstorming session.

“It happened rather fast,” Becky explained. “A local reporter came to one of the early runs and during the interview asked, ‘What do I call you girls?'”

The women gathered at a nearby Denny’s restaurant and came up with the name.

In 1983, the second chapter of the WITW was formed in Chicago. Throughout the 1980s, chapters sprang up across Illinois, Indiana, Ohio and Wisconsin. With Brown’s guidance, Women in the Wind eventually grew to over 60 chapters around the world by 2000.

Although Brown has always been a driving force behind Women in the Wind, she never held the position of international president. She was resolute in her feelings that she did not want others to view the organization as something she started for her own vanity. The WITW has been fortunate to have strong leadership throughout its history.

The growth of WITW gave Brown her first opportunity to travel abroad. In 1996, she visited the chapter in England and toured the country alongside fellow WITW riders. She’s also toured Greece on two wheels.

Being a founder of an international organization led to Brown being portrayed in a film documentary “She Lives to Ride” by filmmaker Alice Stone. Through newsreel footage and interviews, the movie presented a positive portrait of women motorcyclists that was at odds with the inaccurate portrayal many movies had promoted up to that point. Brown has also been featured in a book on the subject of women in motorcycling titled “Hear Me Roar: Women, Motorcycles and the Rapture of the Road,” by Ann Ferrar. She has been featured in numerous magazine and newspaper articles. Brown is not just the subject of magazine articles but is also a rider who writes and an avid photographer. Her articles and photos have been published in motorcycle magazines including Ironworks, Harley Women, and Biker Ally.

In 1997, famed photographer Annie Leibovitz traveled to Toledo to photograph Becky and some of the members of the original chapter.

“Annie was in Washington, D.C., photographing President Clinton on Thursday and on that Saturday she was in Toledo taking pictures of WITW. Who would have thought?”

Since Brown founded the club, the road has become much smoother for women who ride motorcycles. Their numbers have increased, they have their own clubs and publications, manufacturers are building bikes for women’s smaller frames and lines of clothing for female motorcyclists have expanded.

Brown and others also contributed in helping women motorcyclists shed their bad-girl image. Women in the Wind has been active in fundraising for charity. An annual Pony Express ride raised money for the Susan G. Komen Breast Cancer Research Foundation.

“The image is changing. It’s softening up,” Brown says, adding that her group is no different from other women’s organizations except that they like to ride motorcycles. “We have everything from baby showers to fundraisers.”

“We’re not tough at all,” Brown continues. “We have all our teeth, we don’t cuss like truck drivers, and we’re not covered with tattoos.”

Brown is an industrial electrician by trade. She lives on five acres near Toledo and loves to garden and travel. She has a daughter and two grandchildren.

Brown will always be remembered for inspiring confidence and unity among women motorcyclist around the world. She was inducted into the AMA Motorcycle Hall of Fame in 2002.