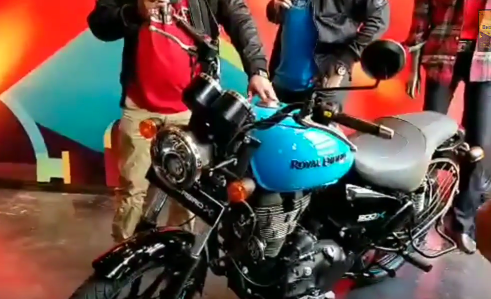 Royal Enfield Thunderbird X: Royal Enfield has launched its new Thunderbird 350X and 500X at Rs 1.56 lakh and Rs 1.98 lakh (ex-showroom, Delhi), respectively. Following a range of spy shots and shots, the launching formally confirms all the advice we reported a couple of days back. The 350X and 500X can be found in four bright colors Getaway Orange and Drifter Blue around the 500X, Whimsical White and Roving Red around the 350X and contain a few other cosmetic upgrades. Concerning pricing, the 350X as well as the 500X are more costly than the normal Thunderbird 350 and Thunderbird 500 by approximately Rs 8,000. There are numerous modifications that set it apart in the normal model — like the brand new gazebo and chairs. The bicycles feature 9-spoke black metal wheels and tubeless tyres (a first for a manufacturing Royal Enfield). The headlamp and tail-lamp will be the very same components as the normal version, replete with an LED daytime-running mild, in addition to an LED tail-lamp. Disc brakes are normal in front and back; although without ABS. The very first Royal Enfields to attribute ABS are the forthcoming Interceptor/Continental GT 650 twins.

The 350X sports indistinguishable ergonomic and visual alterations since the 500X. The digi-analogue twin-pod tool cluster has the blacked-out treatment using a chrome garnish around the dials. A significant change is that the Adirondack chair, a single-piece unit unlike the split-seat on the standard Thunderbird that appears contemporary and also in tune with the remainder of the bicycle’s allure. The grab rail is also a notable characteristic it’s neatly integrated beside the pillion seat and finishes at the tail-lamp unit.