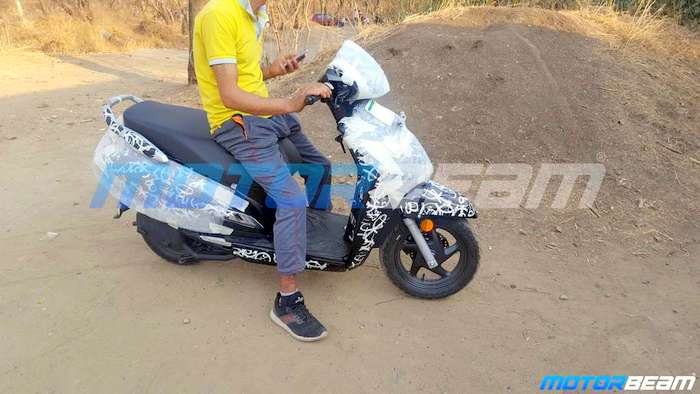 Honda Activa 6G or 2019 Activa 125 was spied near ARAI Pune, the scooter was being used for homologation purpose

A month or two back, Honda confirmed that Honda Activa 6G will feature fuel injection tech and will launch during 2019’s festive season. New spy images have come up which shows Honda Activa 6G under test by Automotive Research Association of India (ARAI) near Pune. Honda Activa is a mass market scooter from Honda which is ringing sales registers for the Japanese company. New spy images have surfaced which were first uploaded by motorbeam. We are speculating that this can also be the bigger brother of Activa, the Activa 125.

The first you’ll notice is the inclusion of telescopic forks in Activa. Since the past two decades, Activa only had linked type suspension. This suspension setup was used only on the Activa and all other scooter makers ditched this type of suspension due to it being obsolete. A telescopic suspension is eras ahead in terms of shock absorption as well as ride quality on good as well as bad roads filled with potholes. We will now get to see the telescopic suspension on upcoming Honda Activa 6G scooter.

Also Read: Check out the best scooters in India in 2019

Telescopic Scopes will be added nearly after two decade

Instrument Cluster has been revised and now it is a single unit. Activa 5G currently having a plastic divider between the analog speedometer and small digital display under it. The new instrument cluster looks premium though. There can be the inclusion of Eco and Power mode like we see in TVS scooters. We can also count on the availability of distance-to-empty and instantaneous fuel efficiency readouts too.

The scooter will make use of Fuel Injection technology. Programmed Fuel Injection System from Honda is ages ahead of carburetor tech. FI engine will make sure that scooter complied to the upcoming Bharat Stage 6 emission norms. Fuel economy of the Activa 6G will also see a slight bump in numbers.

Powering Honda Activa 6G will be the same 110cc engine which does duty on the current gen Activa 5G. The fuel-injected engine might deliver better power and torque figures. But we are speculating that power figures will remain the same and increasing the fuel economy will be the main focus.

Braking department will be taken care by front disc brake with single-piston caliper and drum brake at the rear. Combined Braking System will now come as standard on both Drum-Drum as well as Disc-Drum setup. This particular test mule could be the topmost variant of Activa 6G. Honda might be planning to launch the next generation Activa during the festive season of 2019 i.e, in October-November 2019. As this will generate maximum sales for the company.

If we look from another perspective, this spied scooter can be the 2019 Honda Activa 125. Because the front wheel is a 12-inch unit and the alloy also resembles Activa 125’s wheel. Let’s wait and watch, what this turns out to be.