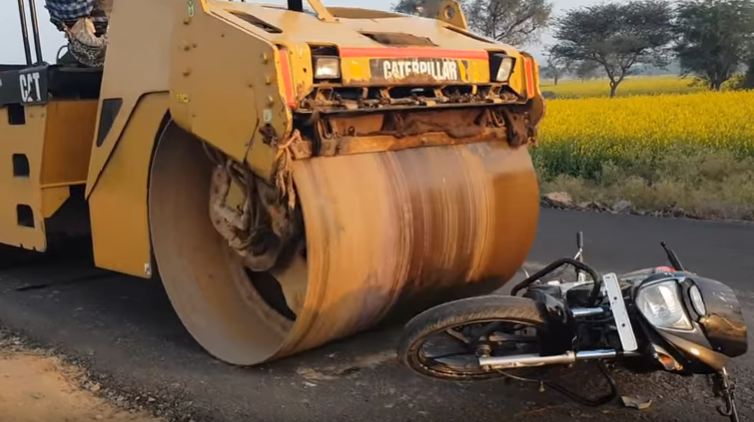 We have seen hell lot of videos of iPhones being crushed, grinded, burned, shot at etc. But have you seen someone crushing a motorcycle under a road roller? Not yet right… We have brought a video made by Blade XYZ.

To begin with, this video is not any kind of accident but an experiment done by the owner of Youtube channel Blade XYZ. In the starting of the video, a CBZ Xtreme is parked in front of a road roller. The roller then tries to crush the bike but after pushing the motorcycle Road Roller doesn’t climb as its roller keeps slipping.

In the next furious attempt the road roller run over the poor Hero Xtreme and crushes it with it more than 20 Metric Tonne weight. In one sweep the bike is unidentifiable, broken parts include front forks, rear wheel assembly, rim, alloys, leg guards, headlight, fuel tank, handlebars, seat and most of the other parts.

Although the Road Roller doesn’t stop here, it runs over and over again completely crushing the bike. At last, the bike at the end turns into a flat block of metal. This time even the engine is crushed badly. In my opinion, nothing from this motorcycle could be used again or sold as a used part.

Overall the video was just a kind of experiment and at the time of writing this post the video already viewed by more than 4 Lakh people and nearing 5 lakh mark. One cannot think about being under a Road Roller. Last year hundreds of loud motorcycle mufflers were crushed under the Road Roller by Police in order to get rid of them.