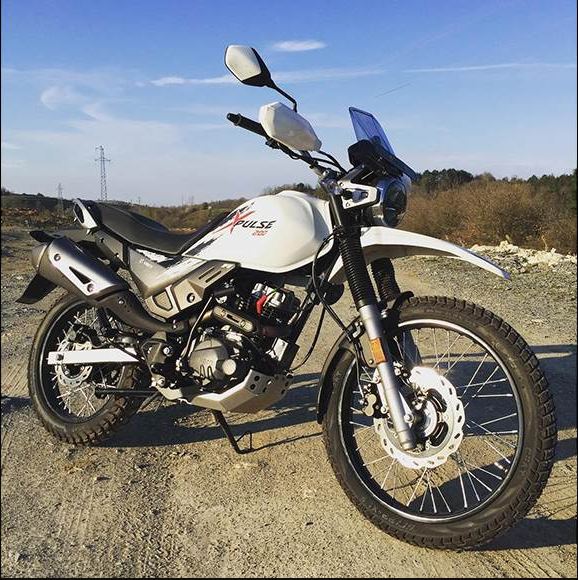 Hero XPulse 200 price for Electronic Fuel Injection is Rs 1.05 lakh ex-showroom. EFI demands a premium of Rs 8000 for the carburetor variant. XPulse with Carburetor is cheaper than Himalayan by Rs 85,000 (that’s nearly a lakh bucks). EFI variant, on the other hand, is cheaper by Rs 77,000. Add two grand difference in each if you are considering white or black colored Himalayan.

Hero XPulse 200 gets round LED headlight with a partition in between. A large beak type mudguard keeps away the dirt and gravel from the rider. There is an engine bash plate to protect the engine during offroading. Kunkle guards are also provided to protect riders hands in case of a crash. The exhaust muffler is high mounted so that the bike can pass through shallow water crossings.

The bike features a brand new fully digital instrument cluster which also comes with Bluetooth connectivity. Once paired with Bluetooth, you can get calls and message alerts but the most important thing is navigation. With the help of Hero Ride Guide app, you can use the navigation feature while on a tour.

Hero XPulse 200 kills the R.E. Himalayan with its pricing

Powering the bike is the same 200cc engine which is present in Xtreme 200R and 200S bikes. Even the power output is similar at 18.1 bhp and 17.1 Nm of twisting force. However, the XPulse 200 uses a larger rear sprocket for increasing the acceleration at the initial end.

As an offroader, XPulse 200 gets longer travel suspension, 190 mm front travel and 170 mm rear travel. Braking is taken care of by discs at both the end accompanied by a single channel ABS. Here, the single channel ABS is a boon for off-roading.

The front tyre of XPulse 200 is 21-inch in diameter while the rear wheel is 18-inch. Since it is a hardcore off-roading machine, there are dual-purpose tyres on both ends which are made by CEAT. The ground clearance is 220 mm which is same as that of Himalayan. There is also a piece of bad news for riders who are short in Height, the seat height is 825 mm high. Sigh!

Another motorcycle which is also an XPulse but made for touring long distances on highways and expressways. It is XPulse 200T. This bike is essentially an XPuse 200 sans longer travel suspension and dual-purpose tyres. 200T gets a regular suspension from the Xtreme 200R but are tuned for touring purpose.

Hero XPulse 200T gets MRF Zappers sport oriented tyres for better on-road performance. Front and Rear tyres are 100/80 and 130/70 section respectively. Seat height and ground clearance are not yet disclosed. But these numbers will be lesser than the off-road centric XPulse 200.

My only gripe is that 200T loses on to a high wind deflector shield as it is a must-have for touring. Windblast at high speed is one thing which tires the rider most. There is a good chance that a large windshield will be available as an optional accessory at Hero dealerships.

You can book yourself a new set of wheels from the Hero’s stable in any of their dealerships. The token amount for booking is as low as Rs 2,000 in some places. XPulse 200 and XPulse 200T are the most affordable Adventure and Touring bikes available in India right now. These new bikes can be a game changer for the Hero in the coming times.