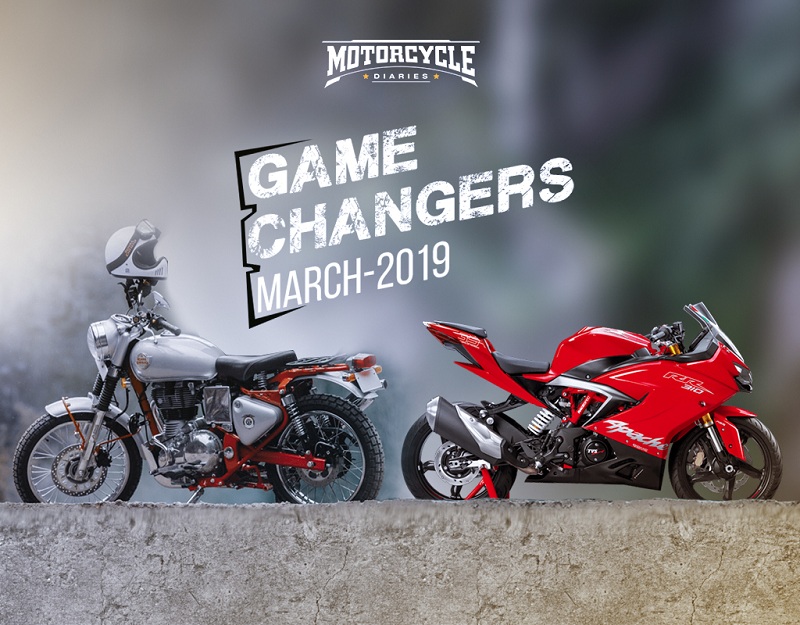 The third month of the year 2019 is coming to an end. Here we bring you the Game Changers of the Month of March 2019. Nothing exciting happened in this month aside from a few bike launches from the biggies like Harley Davidson and Triumph and also from mainstream manufacturers like Yamaha, Suzuki, Bajaj, and Honda.

Mass market manufacturers mostly upgraded their products with CBS and ABS systems to comply with the upcoming safety norms. Upcoming Safety norms mandate every two-wheeler up to 125cc to include Combined Braking System (CBS) and rest must equip with Anti-lock Braking System (ABS). All these are done by the government to increase the safety on the road. Let’s start with our first Game Changer.

One more experiment is done and this time by iconic Royal Enfield in the form of Bullet Trails. The Royal Enfield Bullet Trails are basically Classic 350 and 500 motorcycles with few changes. The changes, as we already mentioned earlier, are upswept exhaust, colored Frame, Interceptor 650’s Logo, and taillight as well as luggage rack instead of Pillion Seat.

Bullet Trails 350 and 500 are priced at Rs 1.62 lakh and 2.07 lakh ex-showroom respectively. If you ask why these bikes can become Game Changer, it is because these bikes have the potential to kick start the affordable scrambler motorcycle segment which is not yet present in the Indian Market. These motorcycles have a huge plus point when we talk out long distance touring and that is, Bullets can be repaired anywhere. Period.

Royal Enfield Himalayan is the best Adventure Tourer you can buy under Rs 2 lakh which is pretty much reliable but Bullets are highly repairable. They have very high repairability which is far greater than Himalayan. There are some people who don’t even consider Himalayan a Royal Enfield product, so the company brought these. Now Bullets can go off-road with confidence. Only time will tell about the sales of these affordable scramblers in the country. After this, KTM can think of launching the scrambler variants of Duke 200 and Duke 250. KTM 390 Adventure is another thing though.

A few days back, I was searching for a second-hand performance motorcycle under on the internet. My eyes were caught by the presence of Apache RR310. Why? maybe vibrations are the issue. It’s being more than a year since Apache RR310 was launched in the country and every second owner has an issue with the vibrations. Now the company had done which is not yet done by any other manufacturer in the country. Recently TVS issued a notification for ECU update of Apache RR310 for improved performance.

The ECU update made the engine run smoother than before, vibrations from the engine side reduced. Next, heavier bar-end weights reduced vibrations on the handlebar. New mountings for the visor stopped the air-leak and unwanted sound. A new softer chain roller will reduce the chain noise. There are many videos where owners are claiming that vibration issues are nearly solved and the bike runs much smoother. Cheers! Now there will be lesser Apache RR310 on the used bike market.

I want motorcycle manufacturers to be responsible for everything that occurs in a bike whether it is good or bad. Mostly the issues are related to rideability, part quality, and features. Manufacturers actually look at their profits, which according to me are most important for their survival but the focus must be given to the product line-up. The example created by the TVS must be followed by other companies as a responsible manufacturer.