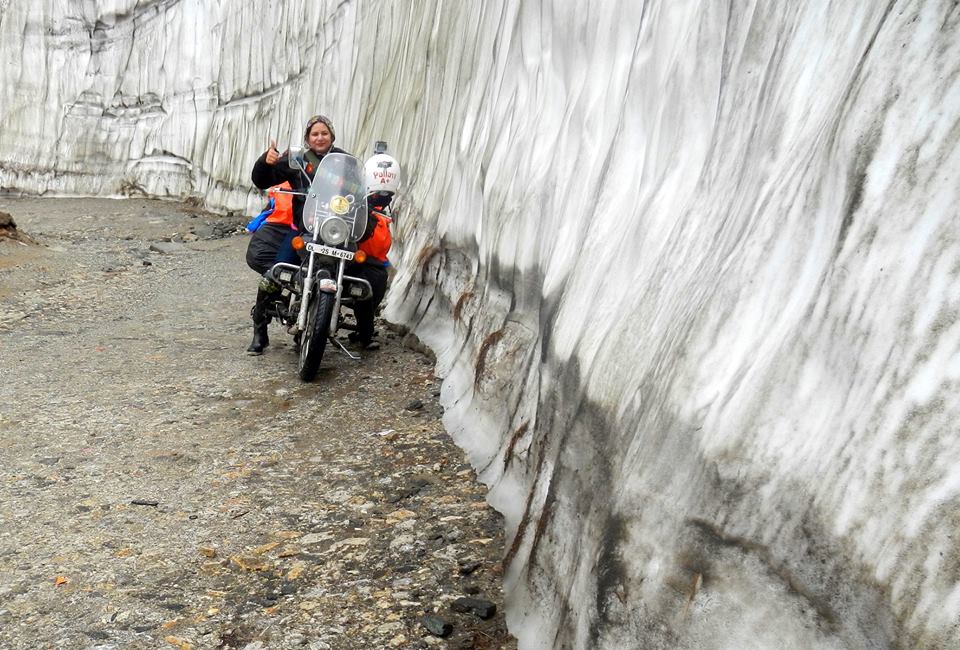 HOPE is wishing that something would happen,

FAITH is believing that something will happen

COURAGE is making something happen.

We are meeting and reading about women who are exploring the outer edge of human possibilities, with no history to quide them and with the courage to make themselves vulnerable that we find moving beyond words. Some are athletes, film makers, adventure travelers, politicians, speakers, racing champions and motorcyclists. All these brave ladies are picking up professions or following their passion, not letting their heart and passion to settle in a cage. Today I will tell you a story about a woman who is known for her strong will and determination, PALLAVI FAUZDAR.

A loving wife of a defence personnel and mother of two sweet boys turned the flames of fear into a forest fire of courage and willingness. Motorcycling brought the best in her. Without neglecting her responsibilities at home, she has opted some of most deadly and breath-taking rides in couple of years. Despite of dominance by male riders in this category, with her strong will, she has taken the biking fraternity by storm. She rides an Avenger and has been to many states: Bangalore, Lucknow, Manali, Udhampur, Srinagar, Jammu and Punjab.

Born and raised in Agra always had the desire to get onto motorcycle and travel across the world. Who says that marriage is the end of all your dreams, Pallavi has achieved a milestone for bikers and pursued her passion with the support of her Spouse, Parikshit Mishra an Army officer posted in New Delhi. She has got recognition for being the first woman to have done rides across so many Himalayan passes on a single ride. A 3,000 km ride to Leh from Delhi and returned in July 2015. All of these have been possible because of her supportive life partner, says Pallavi and has been extremely supportive of his wife’s passion.

There are many women in our country who are equally passionate but their household responsibilities and other commitments don’t allow such privilege. Pallavi admits she is lucky to have such a supportive family which backs her on every occasion.

The year 2015 was very important for her. She had the desire and wish to challenge her limits and prove it to the world that no one ever consider motorcycling just a community for men. This time, she had to travel in the Himalayas in a span of 16 days. Taking up this challenge wasn’t easy. She had to manage everything from scratch. From arranging her ride necessities to managing her kids and their stay during her absence. At the same time she said she felt a need for this ride, both emotional and mentally. She has been passionate about biking and an avid traveller for several years. Pallavi believed that familiar stereotypes about the “dangers” for women travelling alone had to be broken.

This ride was never easy and describing the expedition as ‘arduous’ involving inclined boulder tracks, numerous water crossings, snow-covered roads and low oxygen levels. Pallavi said ‘biking is like meditation to me and the kind of adrenaline rush it gives is unmatchable’. She weathered all storms and came out victorious. She rode, she fell, but she rose to become the champion. At the end of this breath-taking ride she realized that her challenging spirit had paid off and she became one of the most successful female riders in the country. She broke several records and set a new milestone for herself and others in the biking fraternity.

Pallavi became the first female rider to reach Deo Tal Lake, located at 17,950 ft, one of the world’s highest. Her achievements have earned her a place in the Limca Book of records and have also won her special recognition from the UP government. Pallavi has earned a huge recognition in the biking fraternity and in the social circuit some of her achievements are: “Gather that will and courage to burn everything that comes your way to achieve what you are passionate about,

Never get lost in the fire, be one that is built from it”