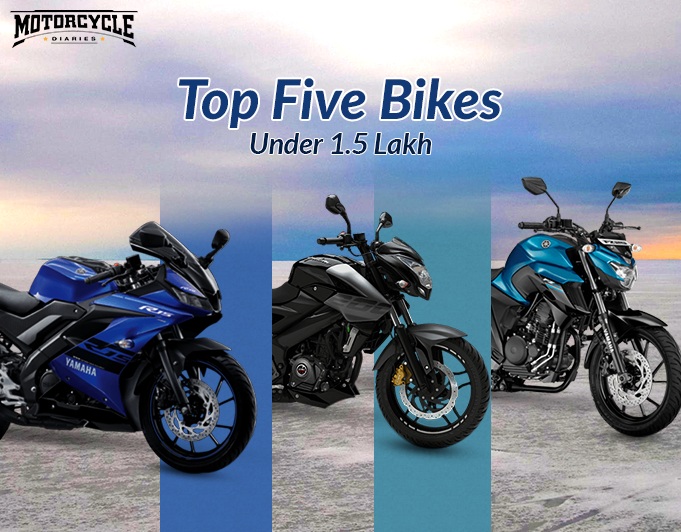 Searching for a Looker, Performer or a Swagger? Best Bikes Under 1.5 Lakh which will make you Hungry for more Power

We already talked about bikes which are priced under Rs 1 lakh as this is the budget on most college-goers in the country. Now, let’s focus on the best bikes under 1.5 lakh (which I think is better in many ways). The prices of bikes mentioned here are ex-showroom, so road tax and insurance will be added after the purchase. One must also note that this is not a comparison of bikes but motorcycles which will provide particular value to your money.

First in the list of top 5 bikes under 1.5 lakh is TVS Apache RTR 200 4V. Apache 200 4V is available in a lot of variants, starting from the basic carburettor to FI and ABS-equipped variants. The price also varies a lot and the highest-priced model is available in carburettor and Dual-channel ABS. Price Tag of this model is Rs 1.11 Lakh ex-showroom.

Apache’s performance is brisk, as it touches 100 kmph in 12 seconds and has a top whack of 125 kmph (which could have been higher with the 6th gear onboard).

Next in the list is from the Pune based Bajaj Auto, the Pulsar 200 NS. This new-gen pulsar has a lot to offer for the masses. A liquid-cooled engine with a 6-speed gearbox is the selling point of this bike. Though 200 NS doesn’t sell much mostly due to people’s love for its sibling Bajaj Pulsar 220F.

Powering this street naked motorcycle is a 199cc liquid-cooled engine which pumps out 23.5 bhp and 18.5 Nm torque. A 4-valve head with twin spark setup helps in making out this much power. The power figures are healthy for a bike which weighs 152 kg.

Speaking about the performance, 0 to 100 kmph is achieved in 10 seconds and NS 200 goes all the way up to a speedo-indicated top speed of 145 kmph. The performance is, no doubt, better than Apache 200 4V. Pulsar 200 NS ABS carries a price tag of Rs 1.12 Lakh ex-showroom. ABS is a single-channel unit which comes with Rear Wheel Lift Protection system.

Also Read: This is how Yamaha FZ25 ABS is better than rivals

Next comes a Yamaha, the FZ25. This quarter-litre motorcycle from Yamaha might not look that beautiful but it offers respectable performance for the price it demands. Priced at Rs 1.33 Lakh ex-showroom with dual-channel ABS makes it an absolute deal.

Powering Yamaha FZ25 is a 249cc single-cylinder 249cc, air & oil-cooled engine. This powerplant pumps out 20.6 bhp at 8000 rpm and 20 Nm torque at 6000rpm. Similar to Apache 200 4V, FZ25 also comes equipped with a disappointing 5-speed gearbox. This limits its highway compatibility. However, this 250cc bike has a comfortable riding posture which makes it good for occasional highway rides.

Speaking about the performance of Yamaha FZ25, the bike is quicker than all the bikes listed here. Period. You know, there is no displacement for displacement (leave R.E.s out of this please). Yamaha FZ25 does 0 to 100 kmph in around 9.3 seconds, but it loses out on top speed front with a speedo indicated top speed of 145 kmph.

Here comes the track machine for masses. The Yamaha YZF R15 Version 3.0 is a perfect motorcycle for learning track riding with its delta box frame which makes you addicted to cornering. The corner craving machine comes with a price tag of Rs 1.39 lakh ex-showroom Delhi. There is a Dark Night Edition which is Rs 2000 more than the base variant at Rs 1.41 lakh ex-showroom.

Powering Yamaha R15 V3.0 is a single-cylinder, 155cc, liquid-cooled engine breathing through a 4-valve head and also comes with Variable Valve Actuation technology (VVA). The motor is good for 19 bhp at 10,000 rpm and 14.7 Nm of twisting force at 8000rpm. A 6-speed gearbox transfer power to the rear tyre. Performance-wise bike is pretty quick for its specs, does 0 to 100 kmph in 12 seconds and tops out at speedo-indicated 150 kmph. This is made possible by the aerodynamic full fairing and taller gear ratios.

A bike list in this price range will never complete without a Royal Enfield. So we have the love of many souls, Royal Enfield Bullet 350 Standard. Yeah, Standard Bullet 350. This retro motorcycle has feelings along with the mechanicals. The feeling of being in the 1970s. The most lovable part is the iconic ‘Thump’. And it’s done.

To hell with the specifications, because people buy it for the things I said above. Till now, Bullet 350 was coming with Drum brakes on both ends. However, new safety norms will force Royal Enfield to include Disc brakes as well as mandatory ABS. Bullet 350 does not have electric start and only comes with a kick. That’s great, as only who immensely love this bike will buy it and not the young kids for showing off.

Standard 350 is priced at Rs 1,17,660 ex-showroom Delhi. The upcoming ABS variant would ask a price of about Rs 1.4 Lakh ex-showroom. Moreover, Royal Enfield can also bring ABS tech by using hydraulic Drum brakes. This same tech is being tested by Bajaj in soon to be launched Avenger 220 Cruise ABS. Here, Avenger 220 Cruise is equipped with rear drum brake which is actuated with hydraulic pressure instead of mechanical linkage.

We cannot include all bikes which are priced up to Rs 1.5 Lakh ex-showroom, though we have an important addition to this list. The bike is priced a little above 1.5 Lakh mark but worth a look. The prices went up only due to the addition of the ABS unit in these bikes.

This is what I was talking about, a Royal Enfield Classic 350 or Thunderbird 350 can also be a choice. Wait, I know, people love these bikes, especially Classic 350 but due to increased price, these bikes do not come under 1.5 lakh mark.

Classic 350 is a new age Bullet. Bikes look fresh and come in various colour and theme options. My personal favourite is the Airborne Blue. Thunderbird 350 derives its power from the same 346cc engine and has what it takes to cover longer distances.

I did not include Yamaha MT-15 in this list because for me MT-15 is overpriced for what it offers. Striping the MT-15 with all its exclusivities and then pricing it at such a steep price is not a good idea. It is better to buy Yamaha FZ25 instead of MT-15 as FZ25 got similar looks and 5 Nm extra torque. With this, I shall end this list of Top 5 Bikes under 1.5 Lakh you can buy in India in 2019. Do share your views in the comments section below and let me know what you’ve got in your minds. 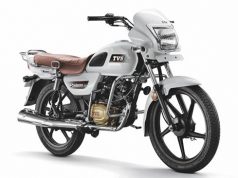 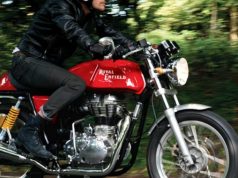