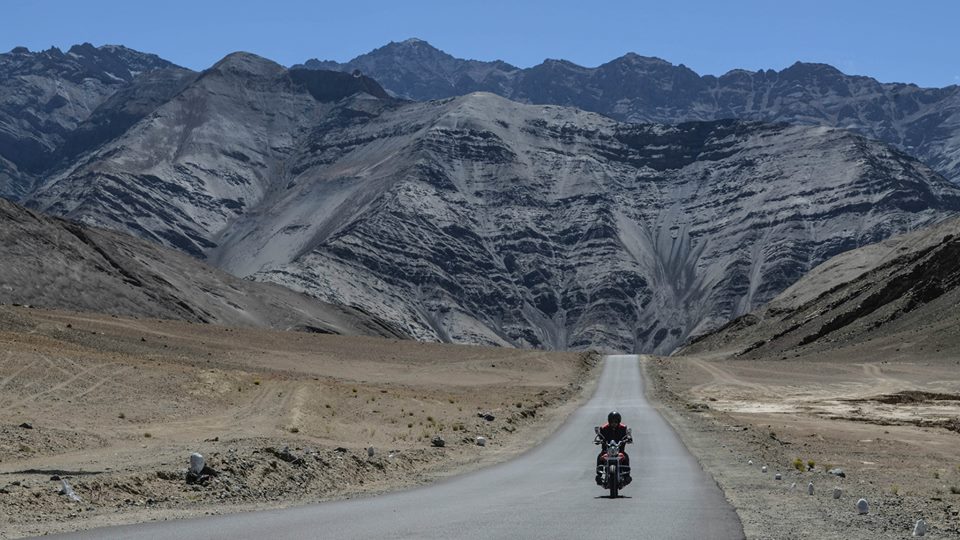 Rock carvings found in many parts of Ladakh indicate that the area has been inhabited from Neolithic times.[12] Ladakh’s earliest inhabitants consisted of a mixed Indo-Aryan population of Mons and Dards,[14] who find mention in the works of Herodotus,[b]Nearchus, Megasthenes, Pliny,[c] Ptolemy,[d] and the geographical lists of the Puranas.[15] Around the 1st century, Ladakh was a part of the Kushana empire. Buddhism spread into western Ladakh from Kashmir in the 2nd century when much of eastern Ladakh and western Tibet was still practising the Bon religion. The 7th century Buddhist traveler Xuanzang describes the region in his accounts.

In the 8th century, Ladakh was involved in the clash between Tibetan expansion pressing from the East and Chinese influence exerted from Central Asia through the passes. Suzerainty over Ladakh frequently changed hands between China and Tibet. In 842 Nyima-Gon, a Tibetan royal representative annexed Ladakh for himself after the break-up of the Tibetan empire, and founded a separate Ladakhi dynasty. During this period Ladakh acquired a predominantly Tibetan population. The dynasty spearheaded the second spreading of Buddhism, importing religious ideas from north-west India, particularly from Kashmir. The first spreading of Buddhism was the one in Tibet proper.

“… Then further west, The Tibetans encountered a distinctly foreign nation — Shangshung, with its capital at Khyunglung. Mt. Kailāśa (Tise) and Lake Manasarovar formed part of this country, whose language has come down to us through early documents. Though still unidentified, it seems to be Indo-European. … Geographically the country was certainly open to India, both through Nepal and by way of Kashmir and Ladakh. Kailāśa is a holy place for the Indians, who make pilgrimages to it. No one knows how long they have done so, but the cult may well go back to the times when Shangshung was still independent of Tibet.
How far Zhangzhung stretched to the north, east and west is a mystery … We have already had an occasion to remark that Shangshung, embracing Kailāśa sacred Mount of the Hindus, may once have had a religion largely borrowed from Hinduism. The situation may even have lasted for quite a long time. In fact, about 950, the Hindu King of Kabul had a statue of Vişņu, of the Kashmiri type (with three heads), which he claimed had been given him by the king of the Bhota (Tibetans) who, in turn had obtained it from Kailāśa.”

A chronicle of Ladakh compiled in the 17th century called the La dvags royal rabs, meaning the Royal Chronicle of the Kings of Ladakh recorded that this boundary was traditional and well-known. The first part of the Chronicle was written in the years 1610–1640 and the second half towards the end of the 17th century. The work has been translated into English by A. H. Francke and published in 1926 in Calcutta titled the Antiquities of Indian Tibet. In volume 2, the Ladakhi Chronicle describes the partition by King Skyid-lde-ngima-gon of his kingdom between his three sons, and then the chronicle described the extent of territory secured by that son. The following quotation is from page 94 of this book:

He gave to each of his sons a separate kingdom, viz., to the eldest Dpal-gyi-gon, Maryul of Mngah-ris, the inhabitants using black bows; ru-thogs of the east and the Gold-mine of Hgog; nearer this way Lde-mchog-dkar-po; at the frontier ra-ba-dmar-po; Wam-le, to the top of the pass of the Yi-mig rock …

Faced with the Islamic conquest of South Asia in the 13th century, Ladakh chose to seek and accept guidance in religious matters from Tibet. For nearly two centuries till about 1600, Ladakh was subject to raids and invasions from neighbouring Muslim states, which led to the partial conversion of Ladakhis to Noorbakshi Islam.

King Bhagan reunited and strengthened Ladakh and founded the Namgyal dynasty which survives to today. The Namgyals repelled most Central Asian raiders and temporarily extended the kingdom as far as Nepal, in the face of concerted attempts to convert the region to Islam and destroy Buddhist artifacts. In the early 17th century efforts were made to restore destroyed artifacts and gonpas and the kingdom expanded into Zangskar and Spiti. However, despite a defeat of Ladakh by the Mughals, who had already annexed Kashmir and Baltistan, it retained its independence.

It appears that the Balti conquest of Laddakh took place in about 1594 AD which was the era of Namgyal dynasty by Balti king Ali Sher Khan Anchan. Legends show that the Balti army obsessed with success advanced as far as Purang, in the valley of Mansarwar Lake, and won the admiration of their enemies and friends. The Raja of Laddakh sued for peace and, since Ali Sher Khan’s intention was not to annex Laddakh, he agreed subject to the condition that the village of Ganokh and Gagra Nullah should be ceded to Skardu and he (the Laddakhi Raja) should pay annual tribute. This tribute was paid through the Gonpa (monastery) of Lama Yuru till the Dogra conquest of Laddakh. Hashmatullah records that the Head Lama of the said Gonpa had admitted before him the payment of yearly tribute to Skardu Darbar till the Dogra conquest of Laddakh

In the late 17th century, Ladakh sided with Bhutan in its dispute with Tibet which, among other reasons, resulted in its invasion by the Tibetan Central Government. This event is known as the Tibet-Ladakh-Mughal war of 1679-1684. Kashmir helped restore Ladakhi rule on the condition that a mosque be built in Leh and that the Ladakhi king convert to Islam. The Treaty of Tingmosgang in 1684 settled the dispute between Tibet and Ladakh but severely restricted Ladakh’s independence. In 1834, the Dogra Zorawar Singh, a general of Maharaja Ranjit Singh invaded and annexed Ladakh to the Sikh Empire. After the defeat of the Sikhs in the Second Anglo-Sikh War, the province of Jammu and Kashmir was transferred to Gulab Singh, to be ruled under British suzerainty as a Princely-State. A Ladakhi rebellion in 1842 was crushed and Ladakh was incorporated into the Dogra state of Jammu and Kashmir. The Namgyal family was given the jagir of Stok, which it nominally retains to this day. European influence began in Ladakh in the 1850s and increased. Geologists, sportsmen and tourists began exploring Ladakh. In 1885, Leh became the headquarters of a mission of the Moravian Church.

At the time of the partition of India in 1947, the Dogra ruler Maharaja Hari Singh signed the Instrument of Accession to India. Pakistani raiders had reached Ladakh and military operations were initiated to evict them. The wartime conversion of the pony trail from Sonamarg to Zoji La by army engineers permitted tanks to move up and successfully capture the pass. The advance continued. Dras, Kargil and Leh were liberated and Ladakh cleared of the infiltrators.

In 1949, China closed the border between Nubra and Xinjiang, blocking old trade routes. In 1955 China began to build roads connecting Xinjiang and Tibet through this area. It also built the Karakoram highway jointly with Pakistan. India built the Srinagar-Leh Highway during this period, cutting the journey time between Srinagar and Leh from 16 days to two. The route, however, remains closed during the winter months due to heavy snowfall. Construction of a 6.5 km tunnel across Zoji La pass is under consideration to make the route functional throughout the year. The entire state of Jammu and Kashmir continues to be the subject of a territorial dispute between India, Pakistan and China. Kargil was an area of conflict in the wars of 1947, 1965 and 1971 and the focal point of a potential nuclear conflict during the Kargil War in 1999.

The Kargil War of 1999, codenamed “Operation Vijay” by the Indian Army, saw infiltration by Pakistani troops into parts of Western Ladakh, namely Kargil, Dras, Mushkoh, Batalik and Chorbatla, overlooking key locations on the Srinagar-Leh highway. Extensive operations were launched in high altitudes by the Indian Army with considerable artillery and air force support. Pakistani troops were evicted from the Indian side of the Line of Control which the Indian government ordered was to be respected and which was not crossed by Indian troops. The Indian government was criticized by the Indian public because India respected geographical co-ordinates more than India’s opponents: Pakistan and China.

In 1984 the Siachen Glacier area in the northernmost corner of Ladakh became the venue of a continuing military standoff between India and Pakistan in the highest battleground in the world. The boundary here was not demarcated in the 1972 Simla Agreement beyond a point named NJ9842. In 1984 India occupied the entire Siachen Glacier and by 1987 the heights of the Saltoro Ridge which borders the glacier to the west, with Pakistan troops in the glacial valleys and on the ridges just west of the Saltoro Ridge crest. This status has remained much the same since, and a ceasefire was established in 2003.

The Ladakh region was bifurcated into the Kargil and Leh districts in 1979. In 1989, there were violent riots between Buddhists and Muslims. Following demands for autonomy from the Kashmiri dominated state government, the Ladakh Autonomous Hill Development Council was created in the 1990s. Leh and Kargil Districts now each have their own locally elected Hill Councils with some control over local policy and development funds. In 1991, a Peace Pagoda was erected in Leh by Nipponzan Myohoji.

There is a heavy presence of Indian Army and Indo-Tibetan Border Police forces in Ladakh. These forces and People’s Liberation Army forces from China have, since the 1962 Sino-Indian War, had frequent stand-offs along the Lakakh portion of the Line of Actual Control. The stand-off involving the most troops was in September 2014 in the disputed Chumar region when 800 to 1,000 Indian troops and 1,500 Chinese troops came into close proximity to each other.

The Indus valley near Leh