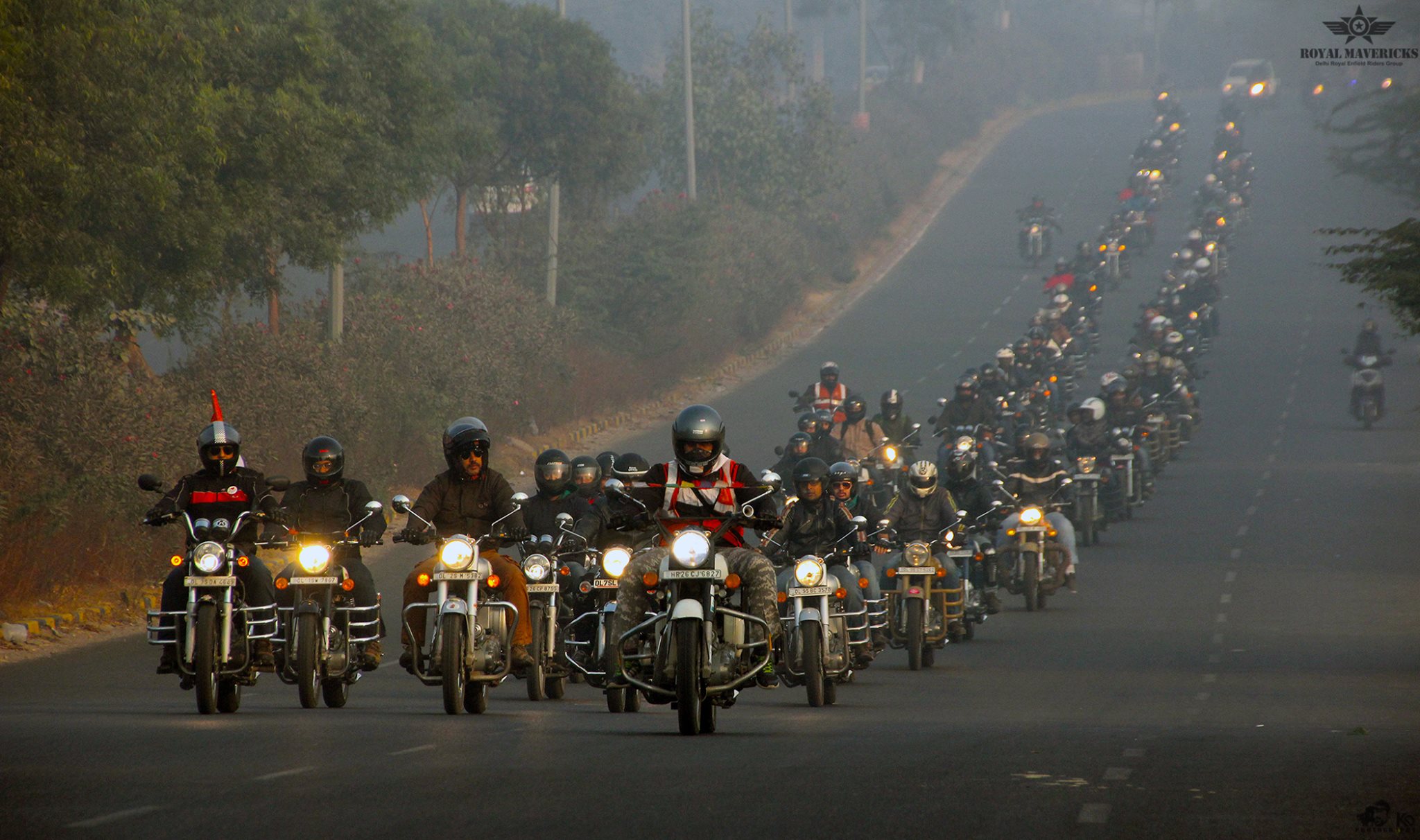 Majestic as they call their machines, The Royal Mavericks ride their Royal Enfields across country representing the philosophy of the true rider. We sat with Tarique Afaque, Ronnie Fogaro and Yashoda Kumari of the group discussing their story as an individual rider as well as a group. Folks who ride, just ride they cannot define a moment or a tipping point which transformed them into a rider, but can only express the impression how it all started, so we want to know how Biking happened to you?

Tarique: I believe it’s the stressful life and environment which we are living in. It’s the main cause which triggers this urge in humans to find an activity where he or she can find solace. Biking has provided me that escape in life, so now to put it in modern-day language biking is my restore button which I press whenever I feel like my system has become slow. It sorts me inside out to deal with life.

Yashoda: Biking happened to me from my father who used to travel to places with his bullet, then in my college days when i went for a first long ride to Panchmadhi and finally when I owned my own bullet and came across Royal Mavericks group, every time biking happened with amazing family.

Ronnie: It all started when I was barely 4 years old when one of my dad’s friends visited us in our then Kolkata house on his Bullet. I can only remember that’s when I fell deeply in love with the thump and the gorgeous pinstripes drawn on the black tank. It’s been close to 3 decades since then, I could not fall for anyone/ anything else more than that. The bike we ride we fall in love with as it is there with you on all your expeditions. To be precise we date it as in love affair and for Royal Maverick, their companion is the Royal Enfield. Reason behind this choice?

Tarique: The answer is simple. An off-roader or a person who loves off-roading will never choose Bentley, Lamborghini or Rolls Royce. So, although you get so many options in the market but if your heart belongs to Royal Enfield anything hardly matters. I might be romanticizing the topic but there is no explanation to the question WHY ROYAL ENFIELD? In a nut shell, it has got a class, You might do Delhi-Phuentsholing-Delhi glitch free in much lesser time, but to me it’s those unpredictable stops, which force you to experience the real existence of India, the local villagers who come to your help, offer tea, share their stories, and that breakdown turns out to be a lifetime memory. You are a different person when you return, much connected to ground, not flying high in superficial premium world. How many members do you have currently in your group? Tell us about the perks of riding with a group when compared to solo rides?

Ronnie: It’s difficult to quote the total number. Being the only motorcycle group that exist in India with more than 10,000 organic followers on our Facebook page. In each ride, we get multiplied in our presence, whether be it the added numbers or in our high spirits to put in even more of what we have got with us to ensure we create an even more brilliant ride better than ever before. We keep improving with each day and every ride and we are always ready to experiment for good.

The perks of riding with a group against a solo ride are that one gets the feeling of riding with family. You always have someone to follow you as a shadow and be there for you, no matter what. Be it a puncture/ breakdown/ chai break/ paratha craving there is someone with you, real people with amazing experiences to share, so much to learn so much to cherish. It’s all together a different experience and a brotherhood we share, when we ride together…it’s very difficult to put in words. You have been on many expeditions for long now, so tell us how many rides you have been to and which is closest to your heart?

Yashoda: I have been to 10+ expeditions with my group of which Juleh ride is closest to my heart because this was the ride where I got two most amazing brothers of the world whom I can rely on for anything and everything.

Tarique: I had a long fetched dream to cross Indian border on my Royal Enfield, The moment I rode through the gate of Bhutan on Jenis (my Royal Enfield Himalayan) is the most cherished memory, I paused, I gasped and what not. Like if I wanted to update fans that I’ve reached Lucknow, There’d be photos of Jenis with locals around (because in those days Himalayan was something new on streets). Jenis nawabon ke sheher me salaam taqseem kartey huye (with a ride like Jenis and amidst the city of emperors I rode, greeting everyone along the way).

Ronnie: It’s a bit difficult to count them in numbers, or even treat them as one as each of them summed up a different story with moments to be cherished for eternity. Though all of them were special, but if I must name one of them, then I would like to mention our new year’s ride we did in December 2016 to Bikamp Aravallis Resort, on the beri ke Hanumanji road in the outskirts of Jaipur, Rajasthan. It was hell of a ride, and we had tones of fun. Across the globe biking always had often been picked as a profession which involves a lot of passion and courage, but Indian bikers somehow fail to opt biking as a profession. What is your perception in this context and also what do you do when you are not riding?

Yashoda: I agree Indians fail to opt biking as profession due to family and surrounding issues as biking is considered to be bad boy’s cup of tea. When I am not riding then either I am busy with home or office works or i am sleeping.

Tarique: Well, I don’t agree with this, problem with Indian biking scene is different, it’s not that we doesn’t have professionals over here, it’s just that people who have their heart and soul in riding doesn’t really care about boasting about it or do a Facebook check-ins before leaving or after achieving. On the other hand India is going through a Tsunami of self-proclaimed riders who ride for superficial fame and it’s the entire motive of riding falls flat on the ground. I see so many group starting off with so much energy, be it out of competition, but within six months all I see is just a domain eating away Facebook data space, things should be consistent and one should make sacrifices to keep it alive, to keep it happening, to encourage people to join. But you can’t have a healthy environment to develop a riding culture with these sort of “over powering personalities”. You received a trophy from Election Commission for supporting voting awareness campaign; tell us about that campaign and how it all started?

Tarique: You’ve touched wrong cord. Our group’s file was thrown off the table in front of my eyes; it was a massive ride with more than 3000 participants. We initiated to take responsibility of marshaling, which Delhi Traffic police objected and said, we will take care of it. With the proven track record and our norms, we officially bagged marshalling beating away Delhi Traffic police out of the biggest ride of Delhi and marshalled it flawlessly. Saif Ali Khan and Sonakshi Sinha were present at the ride. We were a very young group that time, having entire administration on board. The ride was about to start with police volunteers without helmets, it was a tough call. We took a pause and gave a deep thought and then communicated. Entire royal mavericks will back off immediately if we see anyone riding without helmet. The ride was delayed for two and a half hours and helmets for entire police staff were brought somehow. What is that one force/power that keeps you going as a Rider?

Tarique: Wind on the face, serene view in sight and bugs in mouth other way it’s the group and the responsibility which I have taken to bring them back safe to their homes and the trust which my people has put into me.

Ronnie: Feel the wind hitting straight on my face and hair…

Yashoda: My passion for biking and viewing natural beauty together with speedy highways. What matters more to you the functionality or appearance while deciding for a bike?

Ronnie: A combination of both (Power & Style), and if there is a legacy attached then it shall be a big cherry on the cake. As Biking is strengthening its roots in India not only as a sport, but also as an individual’s passion which is birthing many aspiring bikers to opt without any hitch so what is your message to all the aspiring riders out there?

Tarique: We would only like to say ride because you want to and you find your calling into it, don’t ride to prove something to someone, that’s not passion and more than befooling others you are befooling yourself, so please DON’T. Also ride safe as there is always someone waiting for you back home and also there are people on the road as well and when you are on a vehicle you became responsible for their lives too. So Be Alert, Don’t Drink and Drive, and Ride Safe. To join and support The Royal Mavericks visit royalmavericks.blogspot.in 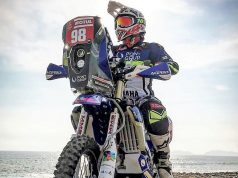 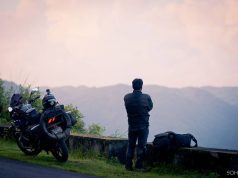 Why Should One Ride Solo?