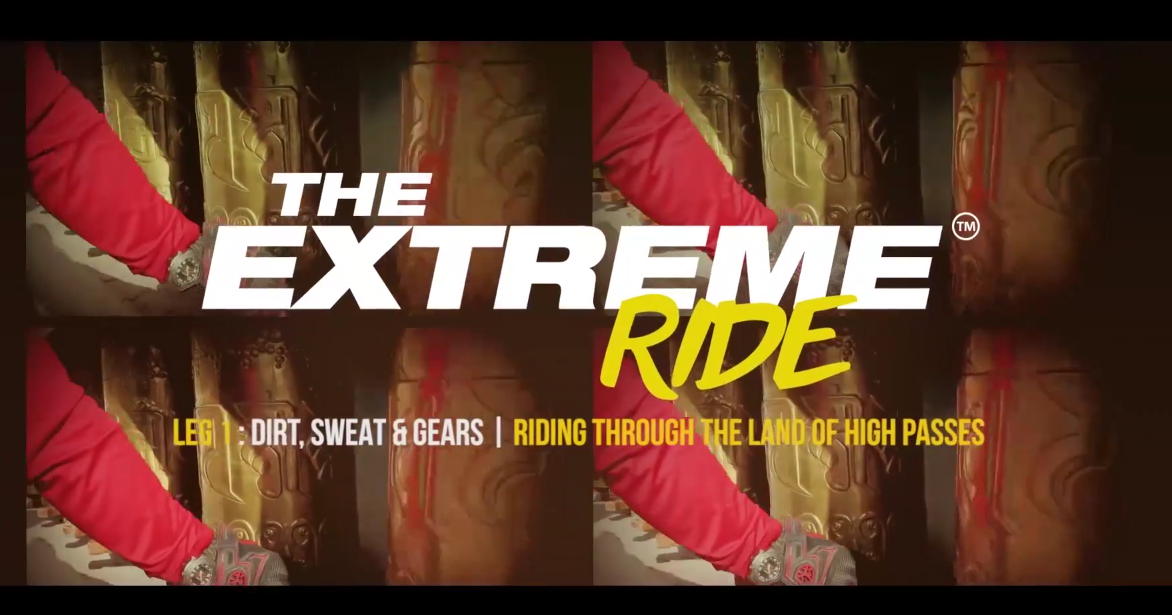 Bored with my mundane corporate life one fine day i decided to break free, it was not the first time when i was planning to exit the 9-9 schedule of my job, it had happened in the past too, but always the attempts were to make money independently, working for my self instead of any boss, or even i ll say, the dream to start up and make it big. This time it was different, this time i was quitting because i was saturated, i could feel myself decaying gradually, i felt the need of fresh air gushing through my helmet , i felt the need to do something out of the box, something not attempted before, something which can give me a high for the rest of my life, something which could be the burning desire to achieve the un achieved and the idea triggered for Extreme Rides I was all set, i had a dream now, i was ready to take the leap of faith, yes i was ready to do it! it was the month of May when the idea seeded in my heart, i shared the idea with many friends and people really liked the entire concept and appreciated it, and that gave me lot of confidence to go for it, I had all the know how about the motorcycles and riding them on any terrain but i had very little knowledge about cameras and capabilities to make a show out of it. Extreme Rides was a planned as a TV show where 10 motor cyclists would cover the entire nation on bikes in a record time of 70 days, more than 38000 Kms and the entire thing was not like a reality show but a show of struggle against nature, against conditions, against emotions, against a lot of things which cant be planned.

I chalked out the entire plan, made the route maps, identified the right places for halts, camping sights, places to cover, people to meet, local stories, heroes, and a lot of things that can be interesting enough to be part of this trip.

Now the hunt for 10 riders started and where else to look at but among your peers only, i had a partner in crime for my riding adventures Peter with whom i had already covered many mountains and passes so it was obvious to have him on the team, then few more friends who came along and joined the crew, the list was populating fast, started getting calls from across country and things started shaping up.

During this time when i was hunting for fellow riders and team members i met Anjali who was working in my last organization, we had a very little during my stint in percept but some how i knew that she has that fine zeal to do it and yes i was right, the moment i spoke about the entire thing with out a second she agreed for it and interesting part is she had no knowledge about motorcycles, had never even pulled a throttle in her life but her confidence was amazing, she asked for 10 days that she will learn how to ride motorcycles and she did that only in 3rd day and then she was the youngest member of the crew and youngest female rider to do the entire Delhi-spiti-leh-kashmir-delhi circuit, a legend in the making i would say.

Every thing was falling in place, started meeting brands who can possibly be a part of it, motorcycle brands, adventure gears, lubricants and many more, Interesting part was every brand showed great amount of interest, had many rounds of meetings but not even a single brand agreed to pay or sponsor the show then last i had no choice but to proceed with the Ride with out any fundings. I personally sponsored the entire ride and decided not to dampen the spirits of everyone in the team as every one was working really hard to do the impossible.

The Ride started in the month of august with the first schedule of 20 days which was suppose to end in september, came back to base to rest for few days and start the ride again for another 10,000 Kms but that never happened, the team got a divide, nameless to say the reasons because till date even i have failed to understand the reason for that. A friend Neha who wrote the Prose about the Extreme Rides is beautiful that it will remain close to my heart forever.

Two of the most powerful motivating forces in life are love and fear. At the moment of adrenalin rush when one is juggling between what they fear and what they love, an incorrigible desire is born which is called “fernweh : longing for far off places”.

Evolution and all hope for better world rest in the fearlessness and open hearted vision of people who travel. To travel is to live in the most soulful way. We will travel as far and wide as we can and to places you will fall in love with and to places that will scare you. Especially to terrains which are tough, which will need strength of limbs and lungs. Far from the idea of traveling for leisure is the idea of traveling for who you are and for who you will be.

For finding the purpose in the chaos. A journey from bombarding thoughts in the head to a state of thoughtlessness. In traveling you will find reasons for forgetting to breathe and to breathe again. Deep, long and complete breathes in a restless life. Few things cannot be taught. Undertake journeys to feel the wholeness of the broken, the innocence in the guilt and the beauty of the simplest marvels of the world.

We are free souls, We want the world to draw inspiration from our eccentricities. We at ExtremeRides will nurture the fernweh in you. We are packing our bags, embracing ourselves and ready to undertake one of the most memorable journey of life time. May we turn into a story teller and have a spark in our eyes when we speak of the risks we took in life.

We could not start the journey again and we could completed what we started, It still hurts to think about it and go back in memory lanes what cud have happened if we would have achieved it, but very little i knew that this wont see the sun light, Now as the series could not materialize but what we experienced in those days stays with us in our camera and our heart hence in all possible ways, we are gathering all the pieces and trying to bring the entire thing for All internet audience Mini web series of Extreme Rides on youtube very soon, the story which could have been majestic would still leave you with an awe.

Last i want to say, as i never shy away from failures and they never let me down either, they just make me learn where i went wrong and give me more confidence to re start every thing. Yes i mean it, this time in 2017 Extreme Rides will be back with a bang and this time there will be no stopping!