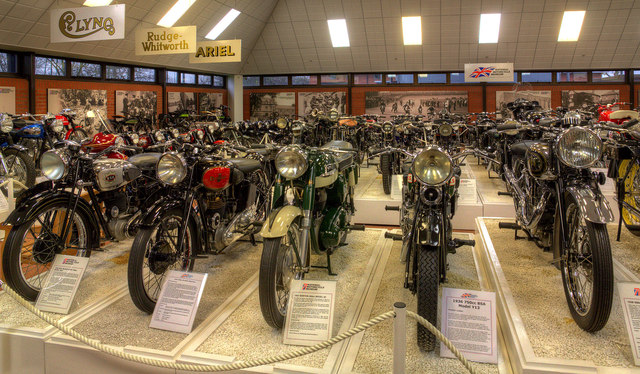 The National Motorcycle Museum occupies an 8-acre site in Bichenhill, Sohihull, England and holds the world’s largest collection of British motorcycles. In addition to over 850 motorcycles, which cover a century of motorcycle manufacture, the museum has conference facilities.

The founder of the museum, construction entrepreneur and self-made millionaire Roy Richards, started collecting good examples of British motorcycles in the 1970s. The museum opened in 1984 with an initial collection of 350 machines. The museum has become the largest collection of British motorcycles in the world, with over 250,000 visitors a year.

The museum was severely damaged by a fire which broke out shortly before 5pm on 16 September 2003. Fire Service investigators concluded that a cigarette thrown away in a designated smoking area was responsible for igniting a pile of cardboard boxes containing old air-conditioning filters. The fire spread very rapidly inside the museum’sdropped ceilings which, though conforming to safety regulations, did not contain a sprinkler system.

After fifteen months and a £20m rebuild which included installation of a £1.2m sprinkler system, the museum was reopened on 1 December 2004. 150 of the motorcycles that had been destroyed in the fire were fully restored for the re-opening.

The museum exhibits well known makes, such as BSA, Triumph and Norton as well as less well known makers in like Coventry-Eagle, Montgomery and New Imperial including Golden Dream Brough and Wilkinson Luxury Tourer. One of the most valuable motorcycles in the world the Brough Superior Golden Dream, which is the only example of George Brough’s show model for the 1938 Olympia show. Handbuilt by Brough and Freddie Dixon, the Golden Dream has two pairs of horizontally opposed cylinders, one above the other, with two longitudinal crankshafts to give vibration free running. The two crankshafts shafts are geared together, with one driving the rear wheel and the other driving the oil pump and magdyno. Two Brough Dream Fours were built but World Wae II stopped development. The second Brough Dream has a black and chrome finish and is in private ownership. Built by the Wilkinson Sword company before the First World War the first ‘Wilkinsons’ were aimed at military use. Optional accessories included a sidecar complete with Maxim machine gun, and a steering wheel instead of handlebars. The model displayed in the museum was built in 1912 and is the top-of-the-range four-cylinder water-cooled shaft drive version. Originally air-cooled, the Wilkinson TMC engine was water-cooled from 1911 and described as a ‘Luxury Touring Motor Cycle’.

I am sure everyone of us is craving to visit this place which owns such a treasure of splendid machines. 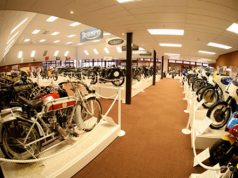