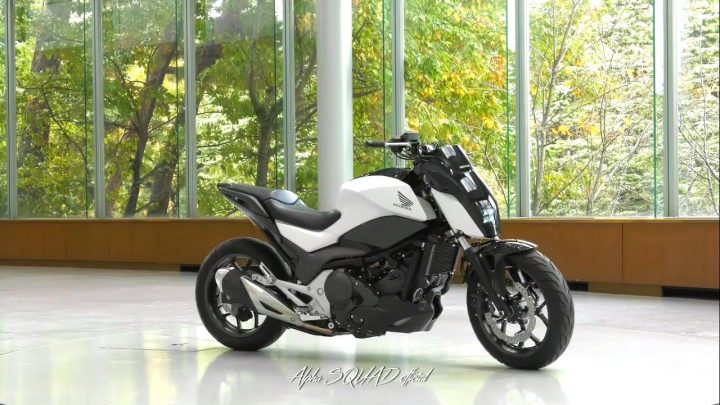 Self-Balancing Motorcycle: FEW concept bikes make the type of mainstream splash that Honda achieved earlier this season with its Riding Assist Concept. It was not jaw-droppingly powerful or stunningly beautiful, only a NC750-based thought for a future commuter machine. Why the interest from the non-motorcycle media? Because it had an almost magical self-balancing ability. Without gyroscopes or stabilizers, Honda only employed a computer controlled method to make tiny steering adjustments, rather than a stunt rider could. An adjustable headstock increased the bicycle’s rake, amplifying the side-to-side motion from these steering tweaks, making it easier to keep the bike’s center of gravity directly above its contact patch. Honda’s smart move of launching the Riding Assist at the Consumer Electronics Show (CES) in Las Vegas, as opposed to a bike event, added into its mainstream effects.

Now, however, the company is going to show a second Riding Assist concept, the Riding Assist-e. Again it’s using a mainstream event — that the Tokyo Motor Show — rather than a pure bike show as its own platform.

The gap between the Riding Help and the Riding Assist-e is a lower-case ‘e’ — and that, most of us know, means it’s electric. Gone is your NC750 parallel twin of the first, and in its own place come an electric motor and a huge battery. The battery is mounted low down, keeping the middle of gravity low, while the motor is over it. There’s a rotating drive integrated into a single-sided swingarm to transmit the electricity, but the frame still looks much like the NC750’s in its overall layout.

Besides the slightly futuristic styling and, needless to say, the self-steering system, there is nothing into the bicycle that looks too much from showroom-ready. Can Honda be dropping a hint that there’s a NC750-class electric mode in the pipeline?