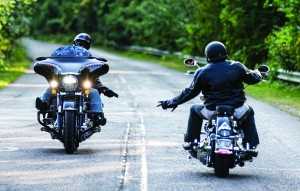 Motorcycling is a gentleman’s art, thus it has its etiquettes. One need not be a douche if he possesses a bike. Keep your space and give space. You are not the king of the road, there are many kings. So what should be the ideal code of motorcycling? Let’s see. There are some useful tips from bikers across the world.

The basic One: Never take your eyes off the road. Distraction is the path to destruction.

So next time when you get on to your machine, try and follow the ideal code of riding.