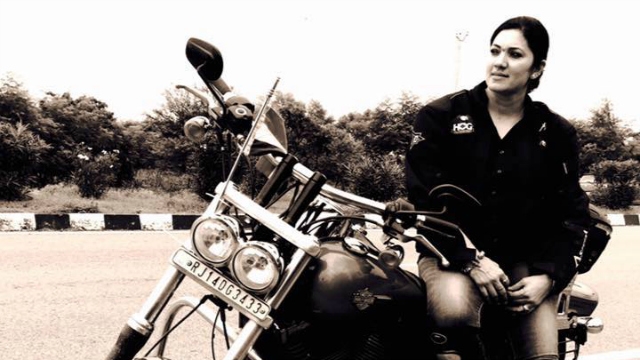 An Indian women-biker and entrepreneur who always aspired other women to become one and dare to choose their passion fighting all the society odds.’ Two riders on two bikes were on the ride across the country, Veenu Paliwal and Deepesh Tanwar. The ride which is left untraveled and uncovered because of the unfortunate accident on 11th April,2016. Despite of her being geared, she got injured and succumbed to her injuries. The accident took place in Madhya Pradeshs Vidisha district. Before starting this trip she planned to shoot the entire ride and make a documentary of her ride which was her dream to prove how women can overcome all the hardships and impossibilities of life. It is said that Veenu Paliwal skidded off the road near Gyaraspur, while they were on their way to Bhopal. 44 year old, resident of Jaipur was given the title ‘Lady of Harley’ and ‘H.O.G Rani’ as she was the only female biker in the group. She was inspired by her father who was an avid biker of his time and use to ride motorcycles like Rajdoot and Yezdi which always fascinated her.

She owns two tea room lounge called Chah Bar in Jaipur and survived by a daughter and a son. She learned to ride bike in college from her friends but couldn’t go after her passion as she did not own one. The Irony was that she married a man who did not allow her to ride a motorcycle but that couldn’t stop her from going after what she always dreamed of. Every ride was remarkable, unique and memorable for her. She covered miles and was on different terrains and had millions of stories to share and tell the world about her adventure which changed the way how she perceived life and proved that one has to have the will to achieve what we aspire. She said, “Apart from speed, thrill, adventure and excitement there is one important thing associated with biking and i.e. security and safety”. As a part of Harley-Davidson group she always spread the awareness about safety while riding. She was a part of every Sunday ride. Few rides were only conducted for a cause, stopping people without helmets and asking them to wear them. She was honored by numerous accolades for her roles and initiatives for the betterment of society and women. We respect the courage and passion she was living her life. Carving her own path, traveling the roads untraveled. We hope that a plethora of women take this legacy forward and we see more and more women motorcyclist on roads. She who was brave is free

May her soul rest in peace.