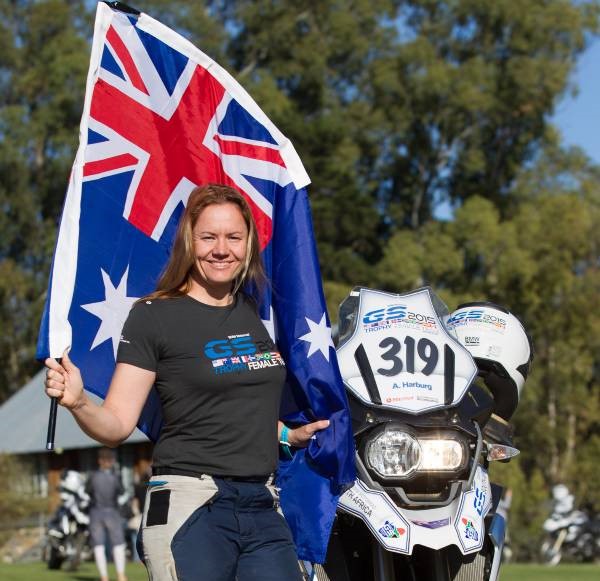 For the first time the BMW International GS Trophy 2016 held in Thailand. Among the 19 teams which took part in event there was an all-female team of three girls who first  won their place at the special eliminator qualifier in South Africa this September. 119 GS girls applied and a jury decided for ten women to attend.

Among the competitors it is Amy Harburg an Australian rider who has won a spot in the annual International GS Trophy in Thailand from February 28 to March 5, 2016. Amy is one of 10 members from all-female team who were from UK, France, Spain, Iceland, USA, Canada, Brazil, Thailand and South Africa. She have participated in five BMW GS Safaris and is the only female to participate in the GS Safari Enduro, which takes GS riders to remote parts of Australia and tests them and their bikes through rocky hill climbs, deep sand and difficult water crossings. She also took part in a 14-day, 7,500km off-road rally in Australia as part of a two-girl team, with no support vehicle and all spares, tools and clothing carried between them.

“I was so excited about coming here for this qualifying event,” the University of Queensland students says.

“I had high expectations for myself, but it was hard to gauge what the other girls would be like until we were all together. But my expectations were definitely exceeded by the time we’ve spent in South Africa and to actually make the team is amazing for me.”

119 female applicants from 29 different countries have been searched to form a team for a trio of lady GS Rider to participate in International GS Trophy finals.

Stephanie Bouisson of France and Morag Campbell of South Africa are two other finalist. All of them together will compete in the fifth annual BMW Motorrad International GS Trophy against the team of men from different countries.

Entire biking world is waiting to witness the ruggedness of these female bikers and how they knock out the male team by accomplishing BMW Motorrad International GS Trophy.