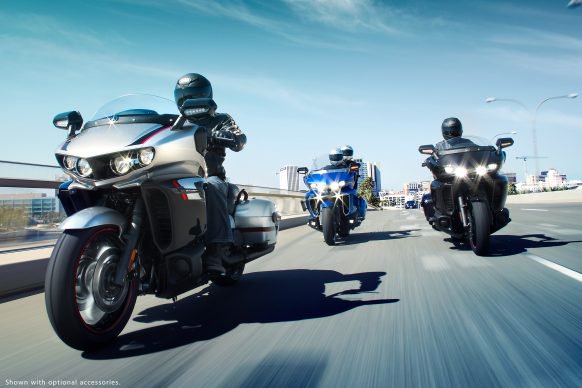 Yamaha Bagger Revealed: Yamaha launched its second America-only big tourer of the year  following the Star Venture with the new Star Eluder. We were nearly on the money about two years ago, when we revealed that Yamaha was planning to launch a bike called the ‘Elude’ – it turns out we were a letter away from the truth. So what’s an Eluder? Well it’s basically the Star Venture – an 1854cc V-twin, fully-loaded, Goldwing-rivalling tourer – that looks like it’s gone under a very low bridge. The screen is sliced off just inches above the fairing and the top-box and pillion backrest are gone, turning it from a full-dress tourer to a bagger.

It’s the same recipe that Honda used to turn its Golding into the F6B. BMW also did a similar thing – albeit more radically – to the make the K1600B from the K1600GT. The BMW was also restyled to give a more American flavour, and as a result the K1600B is soon expected to go full-circle, regaining a top-box and tall screen to become a K1600C

By carrying over the Star Venture’s bones, the Eluder gets the same kit. There are riding modes, traction control, infotainment and heated everything. As usual with these bikes, torque is more important than power, and the Eluder makes 126lbft to haul its hefty 875lb (396kg) mass around. A ‘GT’ option package including sat nav and a CB radio for all those wannabe 1970s truck drivers adds another 1kg/2lb to that total. For most, the standard bike’s Bluetooth-integrated infotainment means more modern communications options probably make more sense than that CB, unless you’re into warnings of Kojaks with a Kodak or Bears in the Air, Good Buddy… It’s all controlled through a seven-inch touchscreen or bar-mounted switches. The dual-balancer-shaft-equipped motor is bolted to a six speed transmission that gives 75mph at just 2,750rpm in top, but Yamaha claims it’s turned to its musical instruments arm to ‘tune’ the exhaust to sound good throughout the rev range.

Chassis-wise, hefty 46mm forks up front and a gas-pressurised monoshock rear keep everything floating along. The brakes have ABS as standard, as you’d expect.